Winterthur is closed to the public from January 3–February 25, 2022. Members have access to the garden and grounds, dawn to dusk, weather permitting. Learn more about our Membership Benefits.  »
Accept Cookies and close banner
Back to top
Open main navigation
Search Site 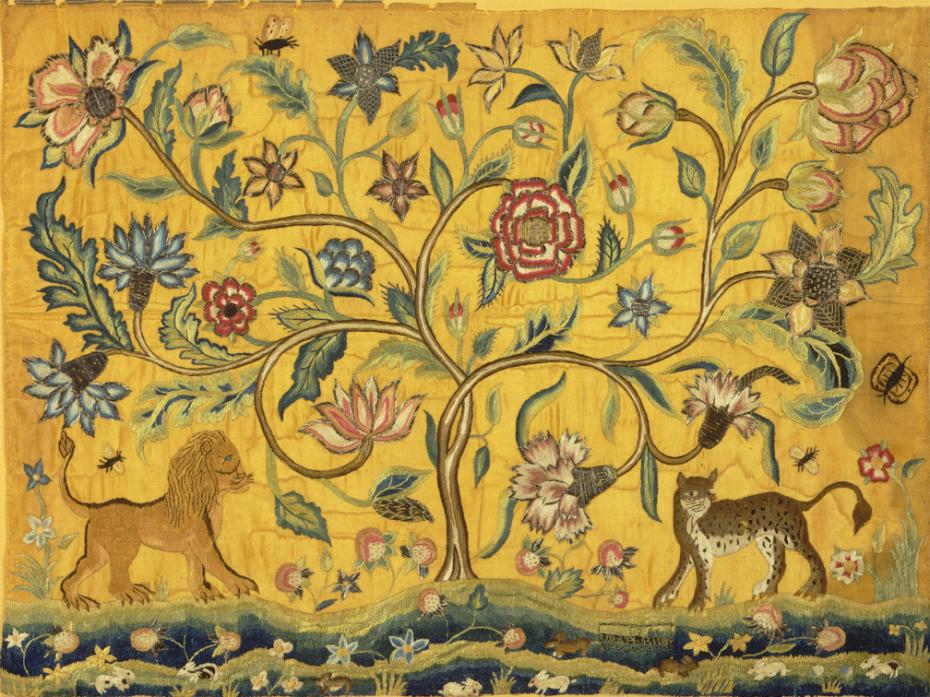 Henry Francis du Pont loved textiles for their colors, patterns, and textures. From quilts to gowns, samplers to bed hangings, Winterthur’s collection includes some of the finest textiles made or used in America. Since du Pont’s death in 1969, the collection has continued to grow, and now includes about 20,000 objects.

Winterthur’s extensive collection of American samplers and needlework pictures, many of which are on display in the house and the Galleries, includes one of the earliest samplers known to have been worked in America, Sarah Stone’s band sampler, dated 1678; a beautiful Philadelphia silkwork picture worked by Mary King in 1754; and a unique Berlin woolwork picture embroidered by Olevia Rebecca Parker in 1852 at the Lombard Street School, a public school in Philadelphia that educated children from the African-American community.

Quilts and other bedcovers are another strength of the textiles collection and feature counterpanes, embroidered blankets, and both Jacquard and float-weave coverlets. Highlights include Mary Foot’s 1778 embroidered bed rug from southeastern Connecticut and Sophia Myers Pearce’s chintz appliqué quilt, made in Baltimore about 1840.

Winterthur’s collection of printed cottons and linens is among the best in the world. Among its rare objects is one of only three counterpanes printed by John Hewson, a Philadelphia printer active in the late 18th and early 19th centuries. Also featured are numerous examples of indigo-resist printed cottons, which were fashionable in the mid-18th century and remain so today, and a set of bed hangings plate-printed with portraits of both George Washington and Benjamin Franklin in the 1780s.

The furnishing textiles used in Winterthur’s rooms have been a source of inspiration to interior designers since the 1930s. Some are significant for the historic fabrics from which they are made, including outstanding English, French, and Indian printed cottons as well as French silks, such as the magnificent curtains made from a silk designed in the 1760s by Philippe de Lasalle (1723–1804), one of the most successful silk designers of the 18th century. Others are exceptional examples of traditional interior design from the early 20th century, many of which were made by the influential firm of Ernest Lo Nano.

For more on Winterthur’s collection of textiles and needlework, please see the quilts database and the virtual catalogue for the past exhibition Who’s Your Daddy? Families in Early American Needlework.

Books about Winterthur Textiles and Needlework