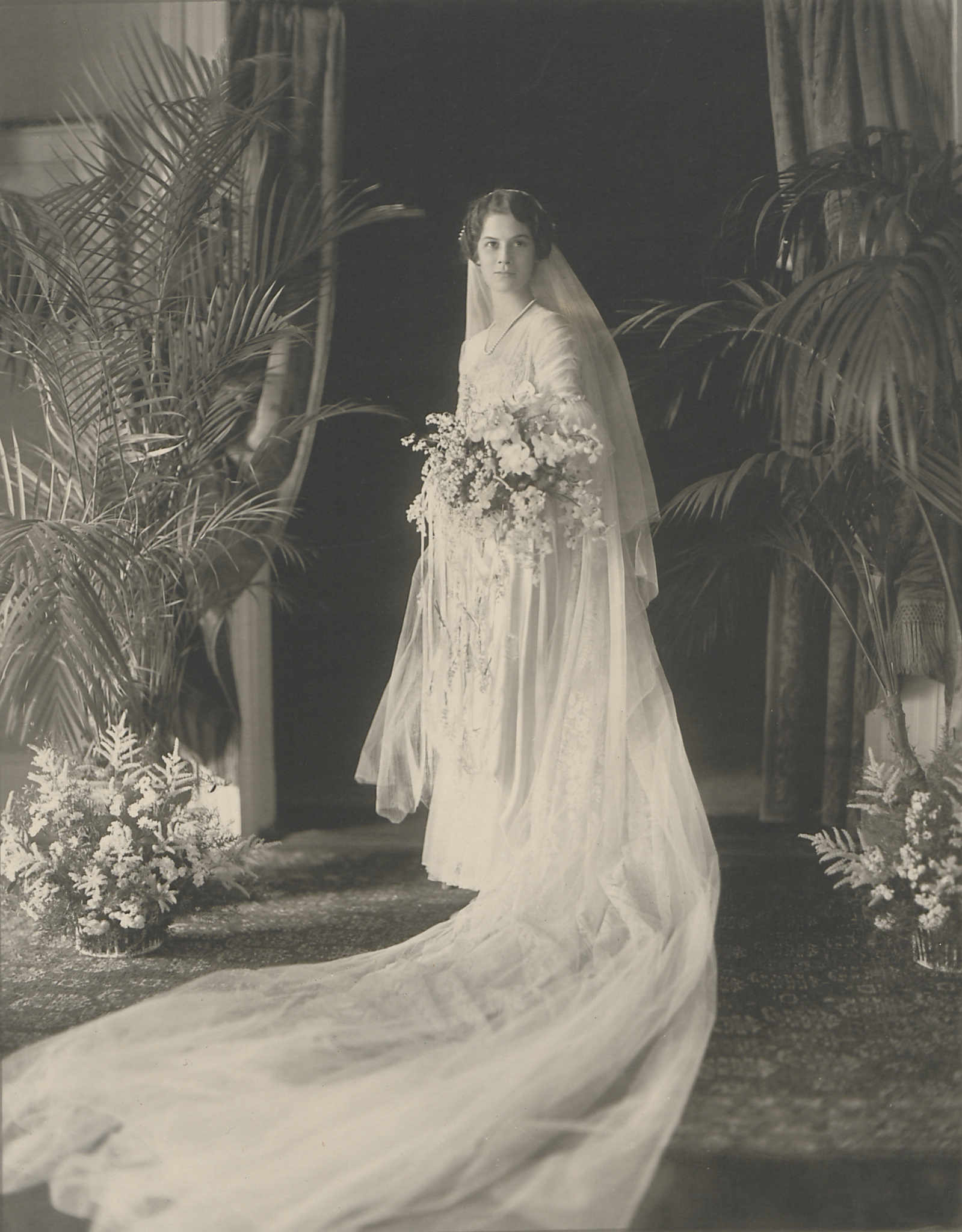 From the start of planning for the current exhibition Winterthur’s Lady of the House: Ruth Wales du Pont, a central element was a re-creation of the dress she wore for her wedding in 1916. There was, however, one significant challenge: there was no dress to copy.

The only information about the dress was a description from The New York Times and two similar photographs. In each, Ruth’s bouquet obscures the waist and lower sleeves of her dress, and the drape of her long veil obscures the back.

Yet that was enough for Dr. Karin Bohleke, director of the Fashion Archives and Museum of Shippensburg University. Bohleke combined the information at hand with her knowledge of historic dressmaking techniques, a handful of period examples, and skills as a needleworker to replicate the gown. “I had to be a designer in a different way,” she says. For the project, Bohleke served partly as copyist, partly as historian.

Scrutinizing a high-resolution scan of one photo “millimeter by millimeter,” Bohleke discerned the details of the under veil—“something old” from her grandmother’s wedding in the 1850s—as well as the motifs in the border and center of cathedral-length overveil. She spent countless hours embroidering the patterns, with the “sprigs and sprays” between, onto a similar antique lace, constantly checking the length and drape of the material as she worked. “There are thousands of stitches in it,” Bohleke says.

After fashioning a headpiece of buckram covered with silk and flowers, she turned her attention to the dress. The photos clearly showed the sheer inverted V overskirt and an over-the-shoulder princess construction covered with net lace and beads. But the back and parts of the bodice were a mystery. Bohleke began to research examples from contemporaneous samples to determine that Mrs. du Pont’s dress likely featured elbow-length flounced arms, a pleated belt, and organza infills front and back.

As Bohleke began creating drafts and patterns for the sewing, she was surprised by a critical fact: Winterthur curators discovered that Ruth’s dress was made of a silver material.

“So here I had been thinking that she has this wonderful ivory, maybe silk-satin overskirt, and I was going to get some great bridal satin and really quality silk, and apparently Ruth sparkled and gleamed as she walked down the aisle in a silver gown,” Bohleke says.

Bohleke located hard-to-find quality silver material from G Street Fabrics in Washington, D.C., then painstakingly sewed and embroidered the dress, carefully concealing the bones of the bodice and all the many fasteners. She completed the work as it was mounted for exhibit in the West Galleries. “It was as close as I could be to the original,” she says.

Bohleke recently told attendees at a virtual lecture “Here Comes the Bride,” part of Winterthur’s Inspiring Design lecture series, that she was struck by several facts as she worked. First, the luxury length of the ensemble was provided by the veil, not by a train, as was fashionable at the time.

Further, the silver material was itself a luxury, with historical precedent established by royal brides in Europe. The fabric made a strong implication about the significance of her marriage to the wealthy Henry Francis du Pont. Both bride and groom came from socially prominent families.

“Also knowing what I know about the fashions of the day, what struck me the most is Ruth completely ignored the very comfy ankle-length or calf-length full skirt” that was popular at the time. “The skirt is out of date.”

Bohleke therefore believes that “because (high) society at that time period was so conservative, I think she had a lot of influences on her, perhaps her mother, perhaps other women in the family, social pressure, that actually made her opt for a conservative style.”

Bohleke also speculates that Ruth likely looked at the remains of her dress one day and “chucked it, quite literally, because there was nothing left to save.” Manufacturers of silk at the time treated fabrics with heavy metal salts to add weight, and those salts “more or less consumed the fabric,” she says. “The lining of the dress probably completely shattered.” And with silver’s tendency to tarnish, the fabric that did not flake away probably discolored horribly.

“That being said, she had an absolutely gorgeous dress,” Bohleke says.

And Winterthur has a stunning re-creation. See it in Winterthur’s Lady of the House: Ruth Wales du Pont.