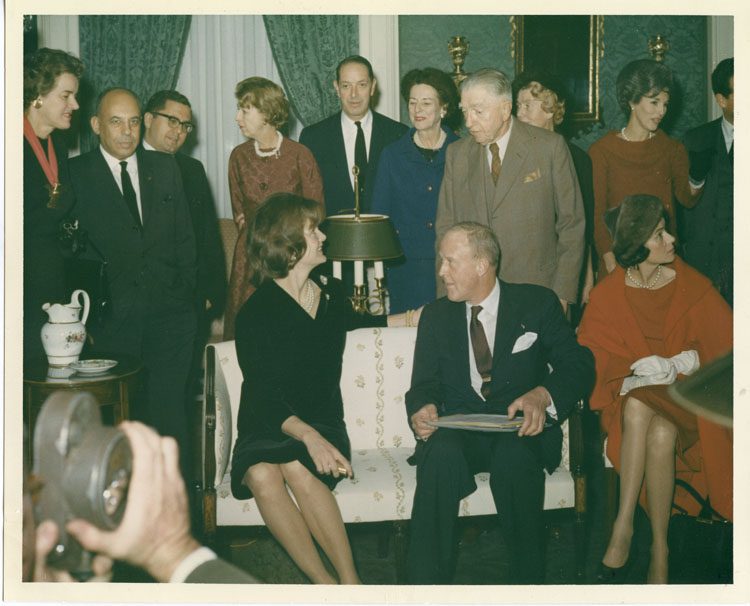 In 1961, Jacqueline Kennedy tapped Winterthur founder Henry Francis du Pont to lead her Fine Arts Committee, which she tasked with finding historic American furniture and art for her famous restoration of the White House interiors. The story of their partnership will be told in Jacqueline Kennedy and H. F. du Pont: From Winterthur to the White House, which opens May 7. Here are a handful of fun facts about the First Lady.

1. Kennedy first visited the White House when she was 11 years old.

And she was not impressed. Raised among wealth and privilege, she was already accustomed to fine homes. She “shuffled through” the White House, recalling later that “Mount Vernon and the National Gallery of Art made a far greater impression.” Upon becoming First Lady, she borrowed every book she could from the Library of Congress to learn more about the executive residence with an eye toward its restoration as a place of grandeur and historic significance.

Their families traveled in the same elite social circles—“Of course I knew her mother,” du Pont later said of Janet Auchincloss—but Kennedy and du Pont had never met until he accepted her invitation to chair the Fine Arts Committee. Their 50-year age difference may have been a factor. After the committee’s work got underway, du Pont hosted Kennedy for lunch at his winter home in Boca Grande. It was their first meeting.

Her family’s heritage was French, she had spent a year studying at the Sorbonne, and she was well schooled in European style by her friends Jayne and Charles Wrightsman, who were major collectors of 18th-century French decorative arts; however, Kennedy intuitively knew the People’s House should be distinctively American. Knowing du Pont to be the most knowledgeable collector of American decorative arts, Jayne Wrightsman suggested Kennedy ask him to chair the Fine Arts Committee. Of course, he knew Wrightsman, too.

Differing proposals for redecoration of the Red Room suggested furnishing with Empire pieces, using work by American maker Duncan Phyfe, or highlighting objects by French maker Charles-Honore Lannuier, who lived and worked in New York. Du Pont, of course, favored the American Phyfe. When he expressed concern about the committee’s accepting an imported mirror with an eagle in its design, Kennedy responded, “As long as it has the eagle, it doesn’t matter if it’s French.” In the end, Empire—French and American—won the day.

Whoops. After spending the day with du Pont at Winterthur, Kennedy and her entourage jumped up from the dinner table in a hurry to reach a flight back to Washington. They were well on their way when du Pont spotted the forgotten purse. He sent Assistant Curator Charlie Hummel and his wife, Marlene, on a speedy chase of the Secret Service down Route 52 in Delaware. Hummell’s wife, Marlene, made the handoff from the car. Mission accomplished.