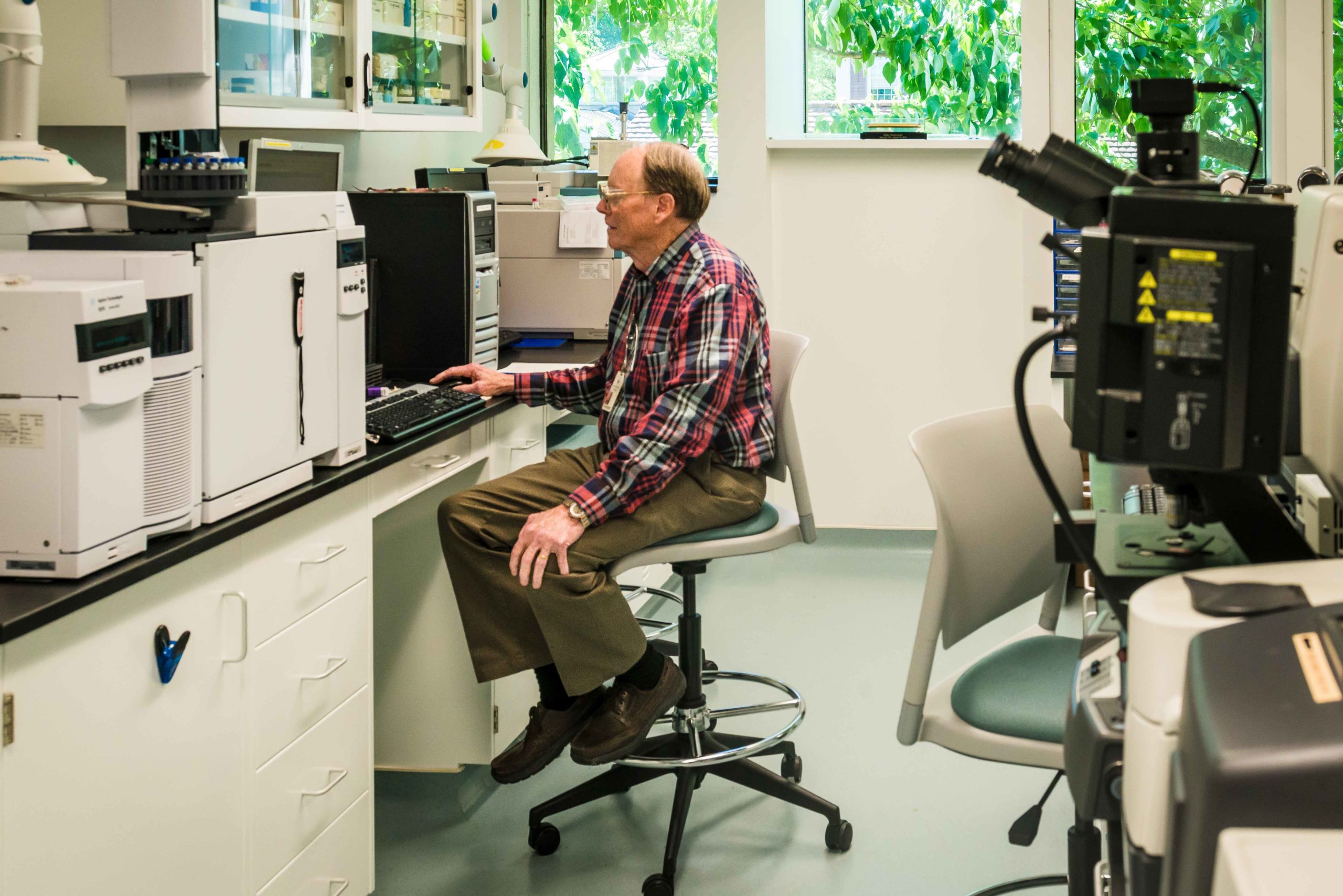 Did you know that Winterthur might have saved Lady Liberty from ruin? That it might have prevented the Liberty Bell from cracking again?  Over the past 50 years, Winterthur’s scientists have answered the call to protect some of our country’s most famous icons, and they have contributed in important ways to the body of knowledge about American craft. From understanding the finer points of fraktur to identifying infamous fakes and forgeries, our Scientific Research and Analysis Laboratory (SRAL) has worked on the cutting edge of conservation science.

One of only 18 museum science labs in the country, the Winterthur  SRAL houses 12 pieces of state-of-the-art analytical instrumentation that can analyze materials on a molecular or elemental level. When the SRAL opened in 1969, however, it housed only one unique instrument: an X-ray fluorescence (XRF) spectrometer, built by Winterthur scientist Vic Hansen, that was large enough to accommodate whole objects. Because other XRF instruments of the day could analyze only small samples of material,  institutions across the country began seeking Winterthur’s help to examine their precious objects, which established the SRAL as a leader in the field.

Preventing Another Crack in the Liberty Bell?

For the United States’ Bicentennial in 1975, the Liberty Bell was to be moved from the tower of Independence Hall to a new location in Philadelphia. Those responsible for moving the famously cracked icon needed help in anticipating risks of a move, so they called on the expertise and technology of the SRAL.

The Liberty Bell we know as the symbol of American Independence is the third casting of a bell originally made by the Whitechapel Foundry of London. On its first ring in Philadelphia, the Whitechapel bell cracked. It was then recast twice by local workmen,  John Stowe and John Pass, in attempts to improve its strength and tone. The current crack is thought to have occurred in the early 19th century.

A special portable instrument was adapted from the SRAL. Taken to Philadelphia, it was held close to the rim of the bell in 10 different locations to collect data. The data showed a wide variation in the composition of metal around the rim, as well as an unsuitable tin content, which resulted in a brittle alloy that cracked easily.

The study concluded that the bell was stable and thus could be moved safely to Independence National Historic Park, where it stands today.

Saving the Statue of Liberty

Having heard about Winterthur’s work with the Liberty Bell, in May 1980 the National Park Service  asked for the SRAL’s help in finding the culprit behind severe corrosion in another American icon, the Statue of Liberty. It was predicted that this corrosion could cause “catastrophic destruction.”

To get an accurate reading, Winterthur scientist Vic Hansen, founder of the SRAL, carefully scraped corrosion products from the statue’s surface to isolate the corrosion from the structural copper of the statue. Hansen found that the only thing “out of the ordinary” was the high level of lead and mercury on the surface, which indicated a high level of air pollution around the statue. Lead likely would have originated from car exhaust around New York City. Mercury could have been deposited from local heavy industries.

While Hansen’s results made it possible to suggest the best materials for rivets and bolts to repair the statue, it was hoped that the results would also raise awareness in the National Park Service about the dangers of air pollution to our metallic cultural heritage.

Fakes and Forgeries: The Lenssen Collection

Connoisseurship, provenance, and scientific analysis are all key in determining whether an object is a fake. From 1981 to 1984, Winterthur scientists analyzed more than 1,000 pieces of silver in the Lenssen Collection 9now part of the Winterthur collection) to document the alloys. They were surprised to find that only 23 percent of the collection was genuine.

Scientific analysis of an object is just one of many factors in determining the authenticity of a work of art. In the case of a Meissen tureen, it proved to be the crucial factor.

The connoisseurship and provenance of the tureen were considered secure. Scholars generally agreed the floral decoration was painted in the style of one of Meissen’s great artists, and information about the tureen, identified by a date of 1738, was published many times.

Analysis of the colorants told a different story. A yellow flower on the tureen contained zinc, the green grass contained chromium, and the gilding contained bismuth. None of those elements would be found on a ceramic made before 1800.

Non-glazed, blank ceramic bodies were often kept in storage by Meissen, so someone in the 19th century might have copied an 18th-century design using a blank Meissen body. Things aren’t always as they seem.

Over the decades, much of the fraktur in the Winterthur collection has been analyzed to identify the colorants and materials. The analyses help us understand the original appearance of some fraktur that has discolored and to refute the notion that artists made their own paints from locally available materials. Such valuable information provides a better understanding of preservation needs and artists’ creation of these objects.

Copper in the brown leaf designs of this fraktur suggests the use of a copper-based green pigment, most likely verdigris, which has degraded and discolored to brown from exposure to light and air over time. Instrumental analysis of the red colorant indicates a mixture of vermilion (HgS) and red lead (Pb3O4). Paint manufacturers often blended vermilion, a relatively expensive pigment, with less expensive red lead in order to increase profits.

The yellow colorant from the flower petal was shown to be a mixture of gamboge, a colorant, and gum Arabic, the binding medium. Gamboge comes from the Garcinia tree of India and Southeast Asia. Gum Arabic originates from a species of Acacia tree found mainly in the subtropics. The presence of gamboge and gum Arabic indicates the artist had access to imported paint pigments and media.

Made in China: A Scientific Study of Chinese Export Lacquer

Beginning in 2014, with grant funding from the Institute of Museum and Library Services, Winterthur conservators turned their attention to the treatment of its Chinese export lacquer objects, while SRAL scientists completed the analytical work necessary to better understand this under-researched form of material culture. To broaden the scope of the project, Winterthur collaborated with the Peabody Essex Museum and the Philadelphia Museum of Art to analyze 22 comparable objects from the three collections.

Understanding the methods of manufacture and materials used through the instrumental analysis conducted at SRAL has informed more effective and longer-lasting treatments for these objects. The research also informs the techniques and materials used by 18- and 19th-century Chinese craftsmen to hasten manufacturing so they could meet the demands of the Western market.

Collaboration is just as important now as it was 50 years ago. Winterthur scientists  Catherine Matsen and  Dr.  Rosie Grayburn work continuously with conservation scientists around the world to advance the scientific study of material culture. Among the SRAL’s most important contributions is its role as a center for teaching scientific methods to conservators in the Winterthur University of Delaware Program in Art Conservation, who go on to spread its expertise around the world.

Which scientific project sparked your imagination most? We would love to hear from you.