As we prepare for Yuletide, house tours are unavailable through November 18. The Museum Store will be closed November 14-18. Plan your visit  »
Accept Cookies and close banner
Back to top
Open main navigation
Search Site 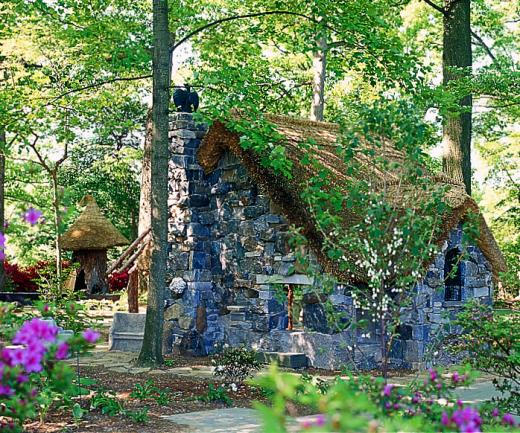 Once upon a time, long, long ago, a family of adventurers set sail across a great ocean. It was a difficult journey that seemed as if it might never end. But finally, the ship came to a land of rolling green hills, shady forests, and meadows filled with wildflowers and singing birds. The family decided to stay and make the beautiful land their new home.

Soon, the family and friends they met had built cozy farmhouses for themselves and sturdy barns for their animals. They planted gardens brimming with fruits, vegetables, and flowers. The children helped with the chores and learned the names of all the plants and animals.

Each day, after their lessons, the children played outdoors, climbing tall trees, swimming in the ponds, and searching for animal tracks in the snow. But their favorite place to meet was a part of the garden called Oak Hill, where a grove of mighty oaks grew. The children never knew that when they played there, they were not alone.

Now, there is an old saying, “Faerie folks are in old oakes.” The woodland fairies are nature spirits who live on Oak Hill. The fairies watched over the children as they played. The children thought it was the wind whistling in their ears when Lark, the music fairy, sang for them. Blossom, the flower fairy, led them to a patch of lilies-of-the-valley so they could pick sweet-smelling bouquets for their mothers. Glimmer, the magician fairy, sometimes played tricks on them. If the children removed their hats and gloves, he would hide them in the strangest places (but he almost always let the children find their things before it was time to go home).

During their growing-up years, the children never actually saw the fairies, but they always had fun and always felt safe on Oak Hill. The years passed, and there came a time when the last child left the beautiful land to make her own farm and garden way of life. The fairies knew that was the way of the world, but they were lonely without the children to play with.

Then, one day, Glimmer had an idea. He said, “Let’s make a special garden for children. We can borrow things from the old farm and garden and bring them up here to Oak Hill. We’ll need a little magic to make it happen, but I know we can do it! We’ll call our garden Enchanted Woods.” And so they did.