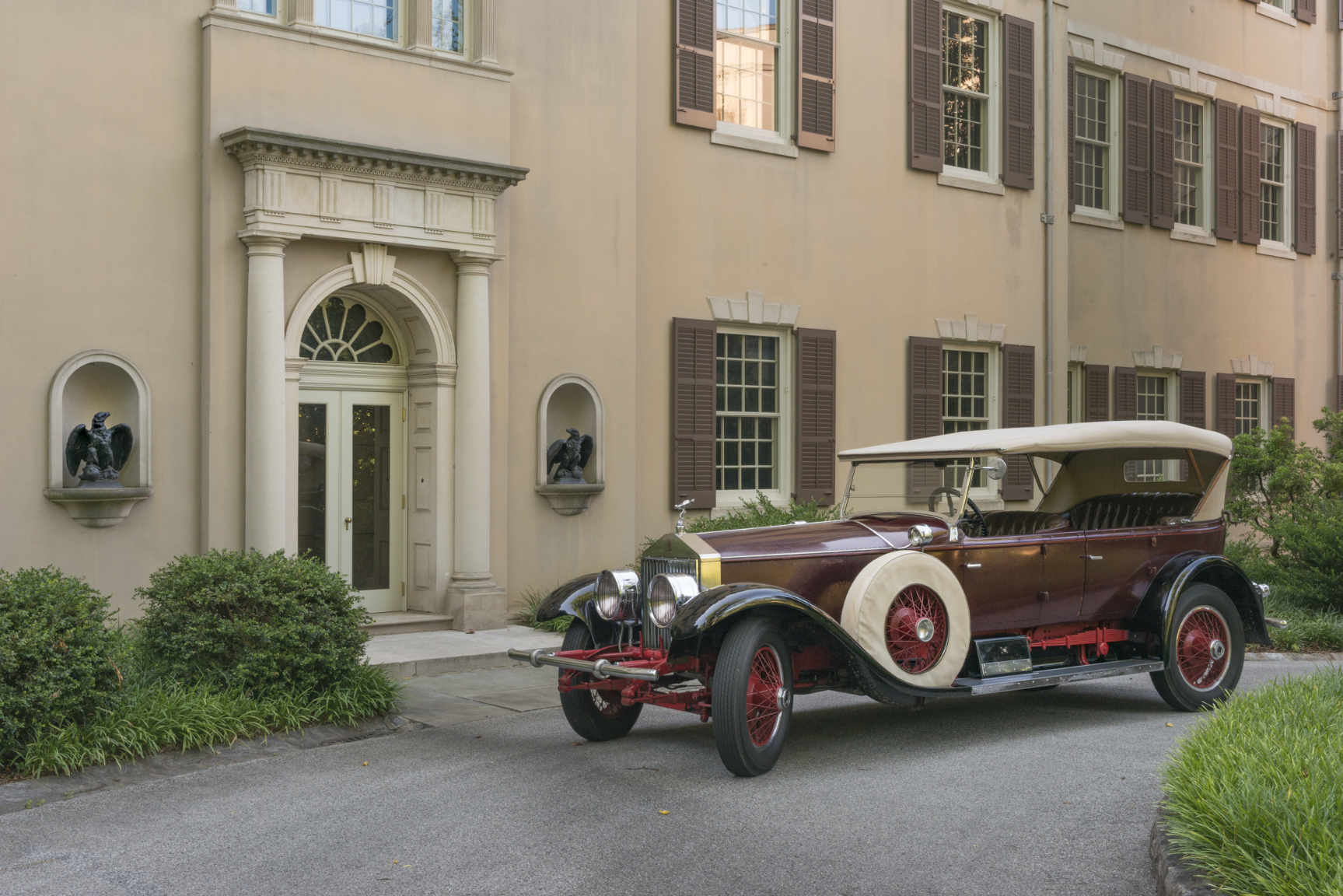 Driving a car from the 1920s is an experience all its own. Here’s a peek from behind the wheel.

“I have to work on my upper body strength,” she says. “It takes a lot to turn from a standstill.”

That’s just the start of differences between driving a modern car and Winterthur’s 1927 Phantom I S 379 FM Ascot Tourer, one of two vintage Rolls Royces in her care as a member of the Rolls Royce Stewardship Team. “It doesn’t do a lot of the things our cars now do automatically.”

For starters, the Rolls doesn’t have power steering. Cranking the wheel of a 4,900-pound auto from stop takes a Herculean effort. Then there is the starting itself, which requires strict coordination of three levers on the steering column, along with all the other mechanics in the car: shift into neutral, turn on the ignition lever and starting carburetor, then depress the starting button on the firewall with your right foot.

From there it gets even trickier: once the engine has fired up, adjust the spark advance from “early” to “late”, tweak the throttle lever to optimal idling speed, dial back the starting carburetor so the running carburetor can take over, then shift into gear.

“You have to do the right things in the right order,” Fair says. “You have to practice over and over to develop the muscle memory.”

On the road, operating gets a bit easier, but it still takes a special touch. The Phantom I’s 12-foot wheelbase precludes tight turning, shifting through the three forward gears happens faster than in a modern manual transmission car, and carburation needs to be adjusted on the fly. “It takes a lot of listening and feeling,” Fair says. Groaning on the uphill? Dial back the intake of air and pour on the petrol. Cruising with some momentum? Run lean. Let the oxygen flow.

“It’s not zippy, but when it’s up and running, it’s like driving any big car,” Fair says.

Fair learned to drive Winterthur’s Ascot and its 1927 Phantom I S123 PM Pall Mall by watching Conservator Emeritus Gregory L. Landrey, by reading the original owner’s manuals, and by practicing with Landrey on the estate before moving onto the open road. Having learned to drive a manual transmission car as a teen was, she says, enormously helpful. (“Thanks, Mom!”)

Even after eight years of driving the Phantoms, Fair says, “I’m still learning. And I am always aware that I’m driving a really special thing. It’s a work of art, a priceless object. People think it’s cool and fun—and it is cool and fun—but it’s also work. It’s a big responsibility to take care of these vehicles.”

The Pall Mall and Ascot are often on regular view at car shows at nearby Hagley Museum and Auburn Heights, as well as the Winterthur Invitational, held June 5 this year.

Travel back to a golden age of automobile design in this video with horticulturist Collin Hadsell and conservator Lauren Fair.