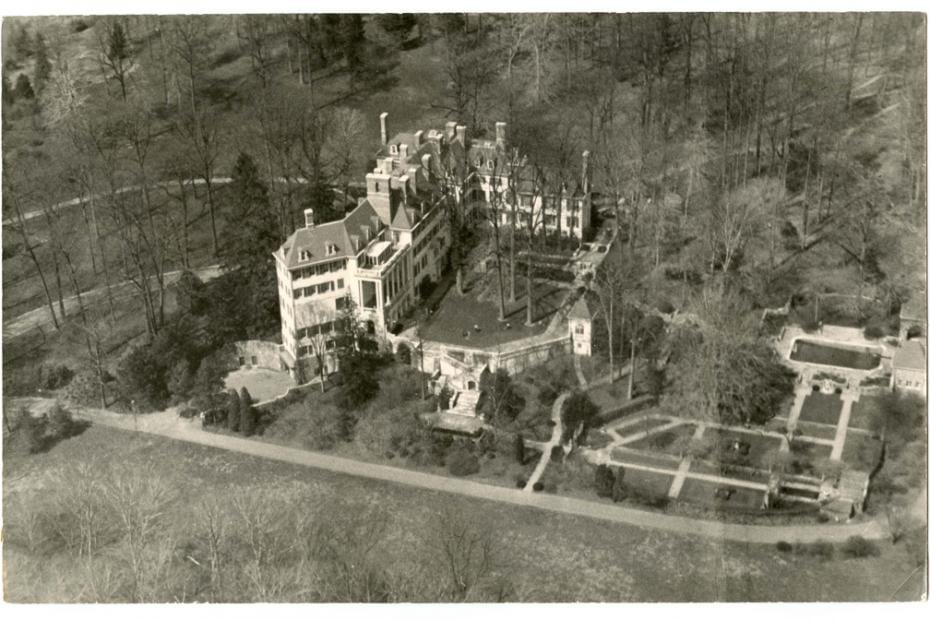 Henry Francis du Pont had three lifelong passions: gardening, breeding cattle, and collecting American antiques. Gardening was his greatest. Even after he turned his home into a museum in 1951, he kept ownership of the garden until his death in 1969. He often said that though he was a mere visitor to the museum, he was always Winterthur’s head gardener.

Three generations of the du Pont family gardened at Winterthur beginning in 1839, when Evelina du Pont and her husband, Antoine Bidermann, came to live at Winterthur. Before they named the estate, built the house, or even sited the well, the Bidermanns considered flowers. Flowers were Evalina’s passion.

The same is true of all the owners of Winterthur. Each generation built on the work of its predecessors, all preferring a garden that made the most of the natural landscape.

The Big Ideas Behind the Winterthur Garden

The most formally landscaped and gardened areas at Winterthur are those closest to the house designed by du Pont and his dear friend Marian Cruger Coffin, the first woman in the country to own a landscape architecture firm. As you move farther away, the tame, cultivated garden gives way to the freer Wild Garden style.

The Wild Garden, a book by William Robinson, inspired a new type of garden design in Great Britain, Ireland, and America at the turn of the 20th century. An idea that appealed to large landowners such as du Pont, the Wild Garden realizes gardening on a broad scale, “placing perfectly hardy exotic plants under condition where they will thrive.”

At Winterthur, “Color is the thing that really counts more than any other,” du Pont said. The flora, mainly naturalized exotics planted in large drifts and grouped with other plants that harmonize in color and form, is arranged to appear as if it grew spontaneously.

The garden includes the broader the estate, with carefully designed views in every direction. The woodlands and meadows are as crucial to the vistas as the formally planted areas. The paths, curving with the contours of the land and passing around trees, draw walkers in.

H. F. du Pont said a garden “should fit in so well with the natural landscape that one should hardly be conscious that it has been accomplished.” Du Pont took inspiration from the landscape he grew up in. The Winterthur Garden is built out of the fields, streams, hills, and woodlands of the beautiful Brandywine Valley.

After gardening at Winterthur for almost seventy years, du Pont was awarded with Garden Club of America Medal of Honor in 1956. The club proclaimed him “one of the best, even the best, gardener this country has ever produced.” The award noted the garden’s woodland layers, which du Pont had opened to create beautiful vistas.

“The woodland trees under planted with a profusion of native wildflowers and rhododendron, acre upon acre of dogwood, great banks of azaleas, lilies and peonies, iris and other rare specimens from many lands, each planted with taste and discrimination, each known, loved and watched, looking as though placed there by nature, forms one of the great gardens.”

Most early 20th century Wild Gardens have since yielded to land development and natural disasters. Winterthur is one of the last. It is surrounded by nearly one thousand acres of farmland, all of it protected under a conservation easement so the property can never be commercially developed. We manage the garden today as though H. F. du Pont were alive. His vision still informs our every decision. We hope you enjoy it.