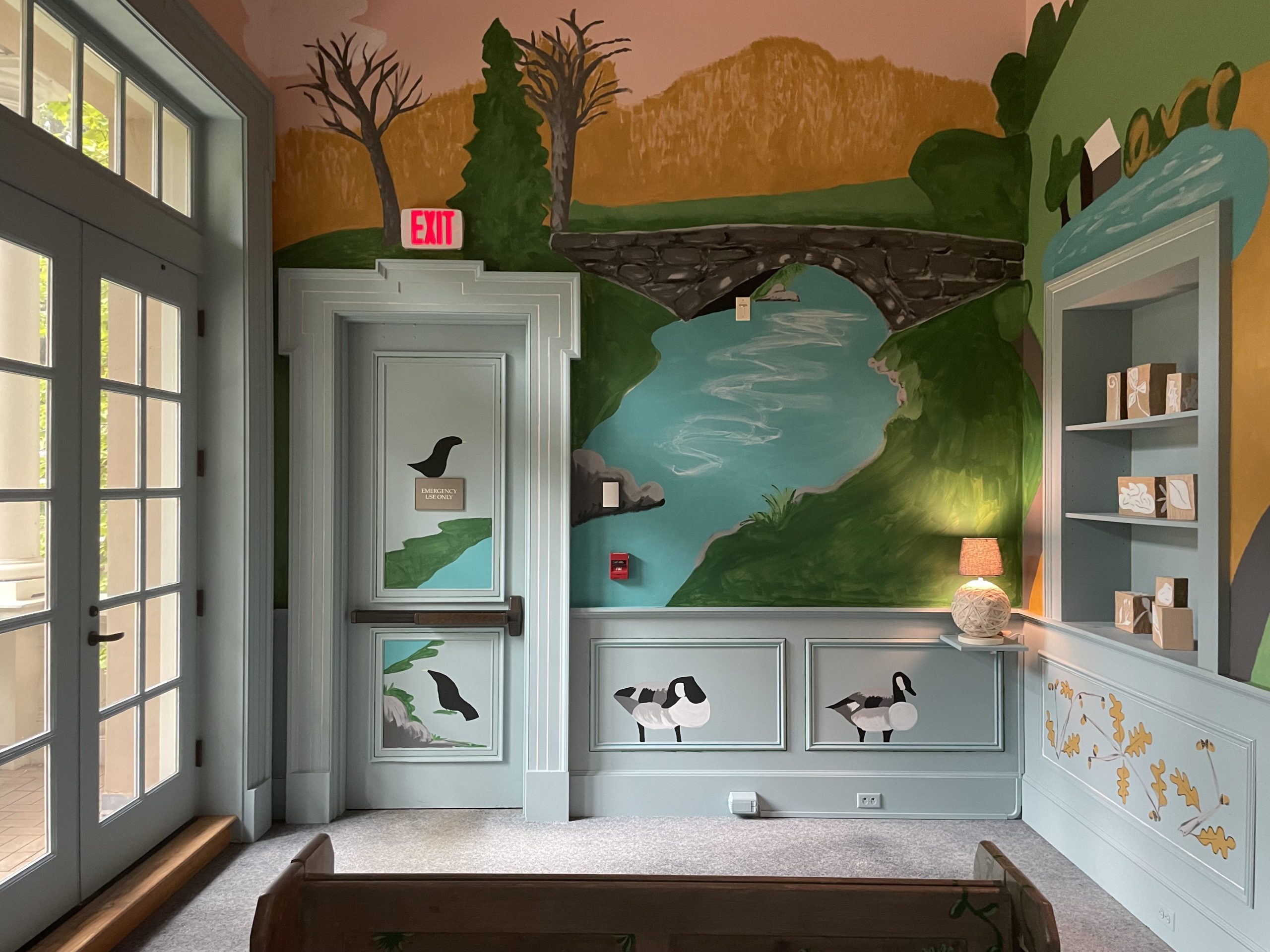 Image Caption: The West Galleries Lounge, as re-imagined by Kim Hall and Justin Hardison of Nottene.

The Winterthur landscape inspires Nottene’s redesign of the galleries lounge.

Kimberly Hall and Justin Hardison of the artist studio Nottene were looking for a way to expand their pattern design business when they decided to explore wallpaper. They both grew up in houses with wallpaper and had built memories around the images and motifs, and they carried those memories with them into the new venture. They liked wallpaper. They knew how it was made.

“But outside of that, we didn’t the history of it and why people had it,” Hardison says. “We wanted to know more.”

Online searches for more information revealed only one book. Then Hall saw a posting for the Winterthur Maker-Creator Fellowship at the Office of Research at Maryland Institute College of Art, where she is on the faculty. “The idea of being able to use the Winterthur archive and learn about old wallpaper was really appealing,” Hall says. “We found there was so much more to discover.”

Sample books and business records in the Winterthur Library quickly became key sources for understanding the history, design, and trade of wallpaper. Pennsylvania German art and Fraktur became important inspirations, as did frequent walks in the Winterthur Garden, which was a sanctuary to the young family during the Covid-19 pandemic.

“There were just endless things to discover,” Hardison says. “We spent tons of time in the research library, in the collections, going into the galleries, walking the grounds, in the storage areas. Everything felt inspiring.”

The result of their research is reflected in a redesign of the West Galleries Lounge, part of the Transformationsinstallation of works by contemporary artists. Transformations highlights work by Winterthur’s Maker-Creator Fellows, who receive special access to the collections and staff for research and inspiration. The work in Transformationscelebrates how Winterthur’s landscape and material culture moved the Maker-Creator Fellows to turn their impressions of the past into artistic and experiential representations that comment on the present.

In the lounge, usually furnished in a modern style, Hall painted a folk art mural of the Winterthur landscape with depictions of Canada geese, blossoming tree limbs, leaves, twigs, and other objects that found their way into their sketchbooks and photo library while they wandered the grounds. Hardison decorated the shelves with woodblocks carved with similar natural imagery to acknowledge their work as printmakers.

“It almost seemed too obvious that we would do wallpaper in there,” Hardison says. “What are the other options? And because we were so inspired by the grounds and some of the other things in the collection and given the theme of the exhibition, we thought it would be a perfect opportunity to build a mural with a similar kind of aesthetic.”

The effect is as pleasing as that in any Winterthur room where wallpaper—some patterned, some mural-like—plays a key role in the design.

Among what the couple learned at Winterthur, “I was impressed that, for some, wallpaper was very much a prized possession,” Hardison says. “I was very surprised to find out how wallpaper was transported, as opposed to the removable and disposable stuff nowadays. These were prized works of art that people would have pulled back down, carefully packaged, shipped across the Atlantic, and then reinstalled. That was really interesting.”

A close look at the Chinese Parlor at Winterthur, for example, shows how highly regarded the wallpaper was by Winterthur founder Henry Francis du Pont. Made in the early 18th century, du Pont discovered the paper, unused, in a warehouse in Paris. It was so old and so beautiful, he couldn’t bear to cut it to fit the walls of his parlor, so he had the ceilings coved to accommodate its full length.

“One of the things that is so special about the Maker Creator Fellowship is that it makes the collections come alive,” Hall says. “Artists and designers can use the collection to make new things. These objects are meant to be renewed. Learning the history of wallpaper made us feel stronger and more confident in what we were doing. So much of what artists struggle with is that our work is not valued in the way other things are valued. We’re carrying on a tradition that has a history and lineage. It’s culture.”

Nottene’s work, as well as the work of the other Transformations artists, is currently on view. See their lounge design in the gallery of Outside In: Nature-inspired Design at Winterthur.