PLEASE BRING A MASK. All visitors are required to wear a mask indoors and on shuttles. More information  »
Accept Cookies and close banner
Back to top
Open main navigation
Search Site 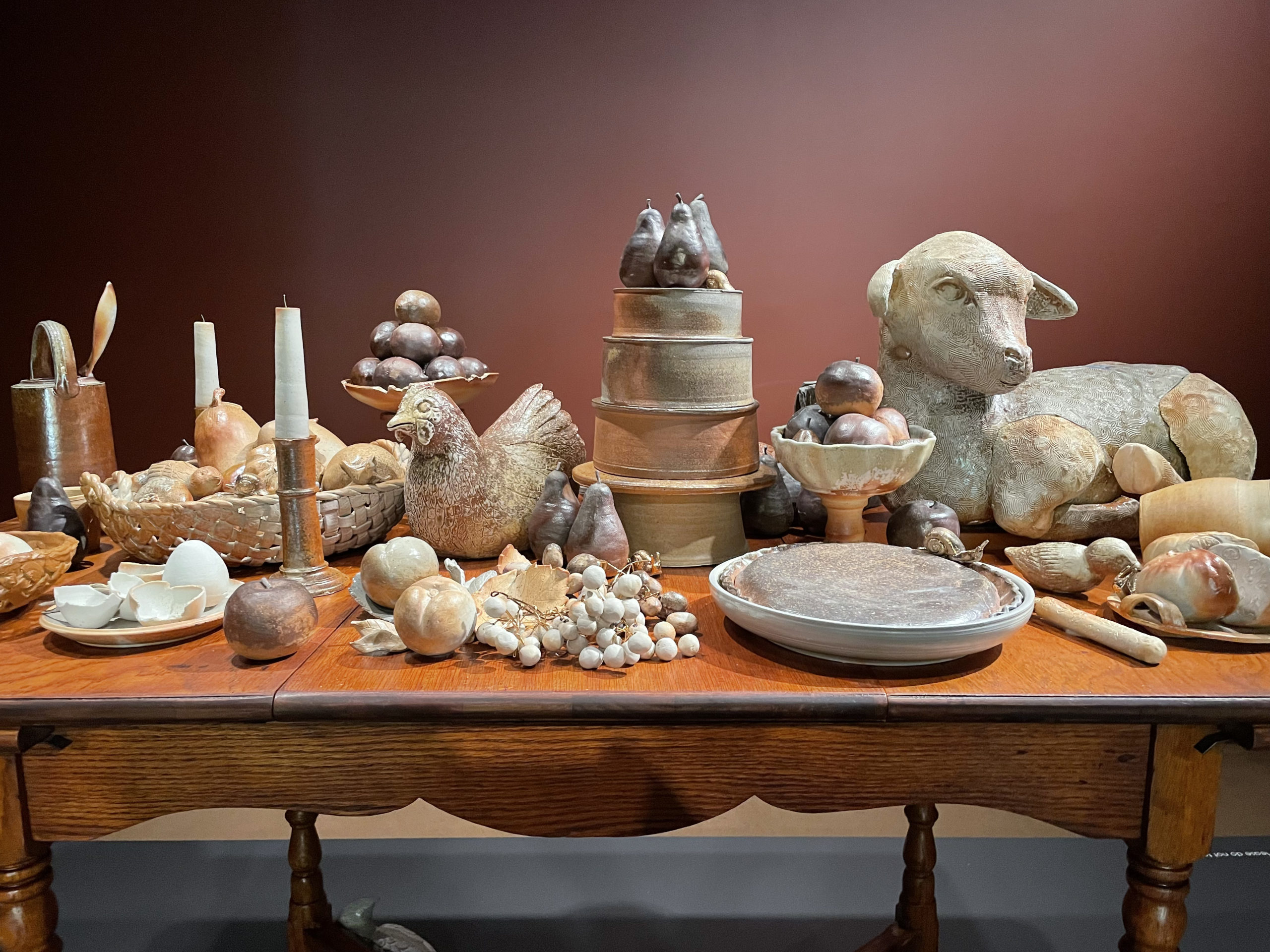 Heather Ossandon’s ceramic still life stays rooted in the everyday while transcending the history it draws from.

Ceramicist Heather Ossandon describes herself as an “Air Force brat.” Born in the Philippines, she spent her childhood in England and the United States, in homes filled with traditional Japanese rice bowls, Korean objects, and British teapots. “We had that in our house because we lived there. I thought that was kind of commonplace but it turns out maybe not,” she laughs.

The unique ceramics traditions of the countries where she has lived and traveled inform both the functional pottery she makes for the commercial market and her sculpture pieces, such as Still Life with Fruit. The work is now on display in the Winterthur galleries as part of Transformations: Contemporary Artists at Winterthur, which showcases current responses to the traditional forms and objects the institution is known for.

“I’m really in love with still lifes and the more I look at them, the more I’m fascinated and just really intrigued by them,” Ossandon says. “Because I teach drawing as well, we use it as a tool, so I think sometimes people believe that they are sort of mundane. But there are actually so many things you can embed in them. And the longer I look, the more I think, ‘Look at this bowl of peaches. There’s so much happening.’ I’ve been really intrigued by that, so it’s just naturally moved into the work.”

Ossandon found ideas for her Still Life with Fruit through Winterthur’s Maker-Creator Research Fellowship, which provides access to all to Winterthur’s collections, grounds, and some staff for research that inspires the work of creative professionals. Among Ossandon’s sources were Mary Jane Peale’s Still Life with Fruit painting, historic glasses, crockery, tableware, cookbooks, and other resources from the Winterthur museum and library collections.

Also incorporated into Ossandon’s assemblage are references to Winterthur’s past as a working farm. Through the specific objects in the still life, some laden with personal significance, Ossandon conveys a sense of place that is specific to one location while being relevant to any location and expressing something that is personally meaningful to everyone.

“I was looking at what people were eating, how people were communicating, how they were recording things all related to food because I feel like that’s really universal,” Ossandon says. “I was also familiar with the Peales and I felt like I wanted to highlight Mary Jane’s work, specifically, being a woman, I wanted to bring those to light.”

Still Life with Fruit also relates to the current exhibition Outside In: Nature-inspired Design at Winterthur not only through some of its forms—various fruits, a snail on the edge of a pie, farm animals such as a chicken and lamb—but also through the idea of transformations, the process of changing clay to rock and glass with heat. Still Life is the first large work that Ossandon has made entirely by wood firing in the kiln, a laborious, time-consuming effort that results in unique colors and surface textures. The lamb is the largest piece she has wood fired to date. “I’m very excited to see that all come together,” Ossandon says.

The particular inspirations for Still Life with Fruit may be recent, but for Ossandon, inspiration from Winterthur is nothing new. As a high school student in southern New Jersey, she visited Winterthur on a field trip in the mid-1990s to see the newly acquired Campbell Collection of Soup Tureens, which includes outstanding examples of ceramic craft.

“I always remembered going there, but I never remembered where it was,” she says. “So fast forward 20 years or something, I went to graduate school at the University of Delaware, then I became aware of Winterthur, and I realized, that’s the place!”

“I really feel like the fellowship has influenced the work I’ve made ever since, but it was influencing me all along because of that trip I had back in the day. It’s has been a really special place for me. Winterthur doesn’t end. And that’s how I feel about ceramics in general.”

Ossandon’s work, as well as the work of the other Transformations artists, is currently on view in the Galleries area.