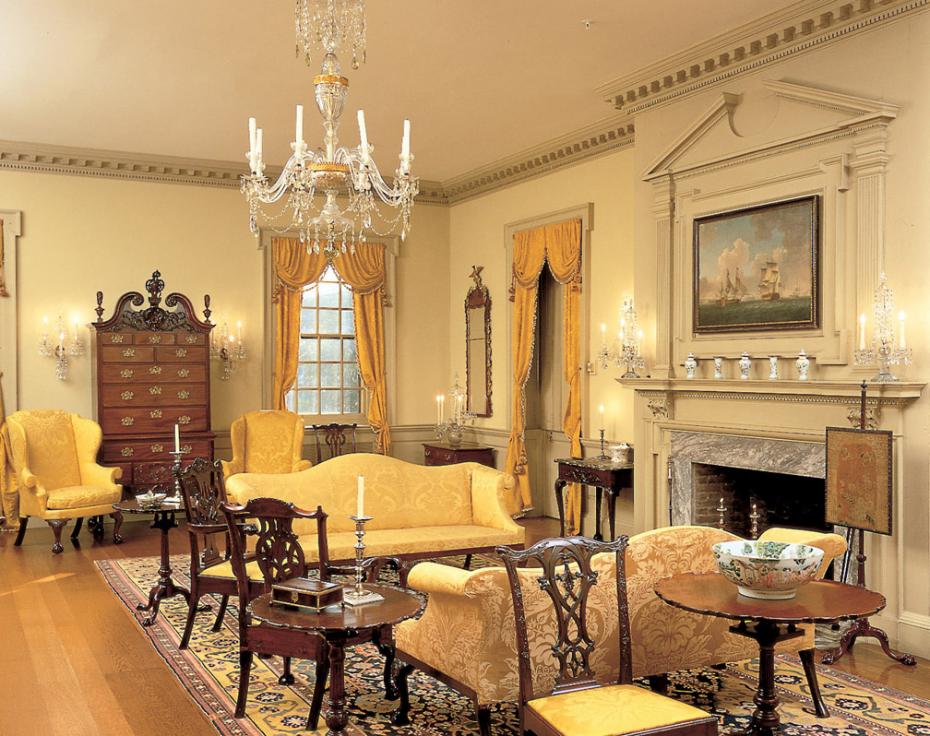 One need only to look at the Port Royal Parlor in the house at Winterthur to see at a glance what made its owner, Henry Francis du Pont, a great designer!

There is the prominence of color in the rich yellow of the draperies, sofas and chairs, a vivid counterpoint to the jewel tones of the rug on which the furniture rests. There is the symmetry of those sofas, facing each other at center, before the fireplace, as well as side tables flanking the mantel, the high chests facing each other from their respective ends of the room, the chairs flanking the chests, the desk-bookcase centered between doorways. Among all this order note the flowers. Even that touch is as carefully selected, beautifully arranged, and precisely placed as every other element of the room.

It is design of a type that is now so established, we barely give it a thought. But in du Pont’s time and social milieu, it a pointed toward a new way of doing things. Says Jeff Groff, Winterthur’s estate historian, “Where du Pont departed from most of the designers of the day was in using American items as high style.”

Understanding du Pont the designer begins with examining du Pont the collector, focus of the upcoming exhibition Outside In: Nature-inspired Design at Winterthur. In his youth, du Pont began collecting the things he found in nature, such as birds’ eggs and seashells. As an adult, his fascination evolved into passion for historic American furniture and decorative arts—unlike most high-society collectors, who preferred the arts and objects of Europe. His collection became a means to the end of creating beautiful spaces.

“He was no antiquarian. He went for the highest quality craftsmanship,” Groff notes. Nor did du Pont feel obligated to fill the many rooms of his home with furniture of the same period, place, or style, as a true antiquarian would feel compelled to do. “He wasn’t trying to exactly re-create Philadelphia in 1780, for example. He used his collection as an artistic medium. He often placed items from different periods among sympathetic backdrops. He used them to create a particular space.”

And he incorporated different colors through the year, via window treatments and upholstery or slipcovers to harmonize with the changing light of the day and season and with the changing color of the seasons as seen in his beloved garden outside the windows. It was second-order thinking that ensured every room look stunning at every time of the year. “That’s where he was truly remarkable,” Groff says. “Shape, color, textures, light—he thought through all that and put it all together.”

Du Pont was highly influenced by peers such as Electra Havemeyer Webb and Henry Davis Sleeper, an interior decorator who turned his own home into a showcase and helped du Pont design his Chestertown House in Southampton, New York. Like his friend Dr. Albert Barnes, who assembled a world-class collection of Post-Impressionist, Expressionist, and folk art for his Merion galleries, du Pont created settings that were not focused on a single object but on whole compositions. Du Pont also relied heavily on his friend Bertha Benkard, an authority on early 19th century furniture who helped him select and buy pieces for his collection.  He described her “faultless taste” as the reason he turned to her for advice on color and arrangement.

Yet du Pont’s aesthetic differed from many of his friends’. Though he valued their opinions and sought their approval, he trusted his own intuitions, thus creating beautiful rooms and legitimizing American objects as worthy of the treatment and esteem given contemporaneous objects from England and France. The vision birthed at Chestertown House was fully realized at Winterthur.

“He moved others to use American pieces in fashionable settings, blending traditional objects often with a more modern eye to color and display,” Groff says. “H. F. really got a trend started. He gave the stamp of approval that it was in good taste to do this.”

Henry Francis du Pont’s influence as a collector and designer was so deep, he was named by First Lady Jacqueline Kennedy to lead the Fine Arts Committee for the White House Restoration in 1961, which will be the subject of a Winterthur exhibition in 2022.